This post is for readers of fantasy fiction who, at least now and then, wish for something different from the genre; for readers who might want to escape "genre-ness" itself, without escaping fantasy.

I have a deep fondness for fantasy fiction. I grew on Robert Jordan, Terry Brooks, Stephen King’s Dark Tower, etc., and one of my greatest experiences reading, ever, were the days spent reading Jonathan Stroud’s Bartimaeus books. But one cannot love something so blindly without, sooner or later, getting hurt. My wound came the day I sat down with Raymond E. Feist’s Magician, which I had just bought in a brilliant gold soft cover edition, and which I was so wanting to like. “A boy's will is the wind's will, / And the thoughts of youth are long, long thoughts,” went the epigraph by Longfellow, and I shivered. Then, after struggling some two hundred pages, I blinked with déjà vu. I put it down. It’s still unfinished today. 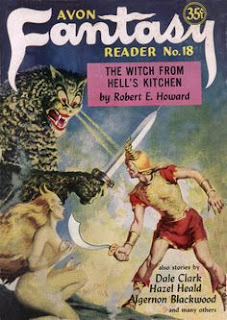 Here’s what’s stultifying. Fantasy literature has two lineages: the pulps and the myths. Leaving aside this latter parent, which is broad and ill-defined (we might include anything from folklore to Tolkien to religious texts), what is the legacy of the pulps? Not cover illustrations of bikini-clad spacewomen on the getaway from tentacles, thankfully. The answer, rather, is immediately apparent to anyone coming to genre fiction after exposure to the classics (Marcel Proust, Jane Austen, Henry James...) or even just writers in the upper echelons of the literary mainstream (Annie Dillard, Marilynne Robinson, George Saunders, name whoever): the prose. From the pulps, fantasy inherits an incredibly low bar in regards to the actual craft of writing, which makes comparatively little effort to take up formal or syntactical concerns as more than tools of story but for their own sakes.

This has much to do with the goals of the authors. Ian Fleming, not a fantasy author but at least one of the founding fathers of the spy genre, compared himself with a young litfic author this way: "The target of his books was the head and, to some extent at least, the heart. The target of my books, I said, lay somewhere between the solar plexus and, well, the upper thigh." In other words he's just trying to give his readers a good time. So are a lot of fantasy genre writers. However, for those fantasists wanting to write prose in which the reading pleasure comes, not just from adventure, magic, etc., but from the writing itself, everything hinges on how they cope with, or shake off, this pulp heritage. Yet there are few writers or reviewers who talk about this.

Take China Mieville’s breakout novel, Perdido Street Station. One can read any number of reviews that praise its intense, startling prose. I found the writing so-so at best. Moreover, in this novel Mieville exercises a tween’s imagination: he’s impressed by big guns, “gangster boss” psychology, and weird sex. Whenever there must be violence, it must be the goriest violence; whenever there must be sinister intention, it must be the cackle-gloating sort. One wonders where that far more tasteful, deftly handled noir The City and the City came from, because, at least here, the pulp roots are absolutely breaking through the concrete.

Or take the more recent secondary-world fantasy by Sofia Samatar, A Stranger in Olondia. The book has been praised specifically for its lavish, sensual prose. Here’s a sample: “His [a guest’s] presence brought an air of excitement that filled the house like light, an air that smelled of festivals, perfume and tediet blossoms, and drew in an endless stream of curious, eager visitors, offering gifts to the stranger: yams baked in sugar, mussels in oil.” But the ornate style masks a mundane heart: this is Samatar’s only literary register. Everything is given this same treatment of the exotic, so that it very quickly becomes a monotone. While reading I wondered, Who could be deceived by this? Well, the novel won the British Fantasy Award for Best Novel for 2014, beating Gaiman’s The Ocean at the End of the Lane. I'm open to being swayed, but in my opinion only in a climate still judging by pulp-fiction standards could this happen.

Now here comes M. John Harrison, a self-named “genre contrarian” who wants to poke his head into this echo-chamber. Every genre “needs constantly reminding that it isn't the centre of the world,” he says. How does he propose to do this? By subverting genre conventions. For example, in the Viroconium books he changes around place and character names, destabilising the sense of an existing secondary world. Or in The Course of the Heart, he undermines fantasy’s impulse towards a monological interpretation. He also just writes killer sentences. However, though much literary finesse is demanded by this approach, it is still situated in the genre camp, since it presupposes awareness of those conventions for it to work in the first place.

What I want to do is suggest a different way one might graciously expose genre-fantasy’s pulp past. This is to look to those books that employ the fantastic, but which do so from outside the genre tradition—isomorphic fantasies, in other words.

It is an untenable differentiation, to be sure, and one made more by feeling than by any exact taxonomical science. Yet I think that it holds enough of its water that we’re not slipping on the ground. By “genre-conventions,” I mean more than tropes (the Dark Lord, the Hero, the deus-ex-machina...); I mean also, and primarily, the matrix of expectations of fantasy fiction which exert hidden pressures on the plot, voice, characterization, etc. I mean, for example, things like the reliance on a “guide” figure or “oracle” in portal fantasy for an authoritative interpretation of the world, and the consequent non-negotiability of history. Farah Mendlesohn explores such conventions in her book, The Rhetorics of Fantasy, and I couldn’t hope to cover them all. Those readers who are interested in enough in fantasy to have made it his far no doubt will have a feel for them and know what I mean.

Authors in this list are either pre-genre-distinction (in the way that H. G. Wells wasn’t writing “science-fiction” per se) or have worked outside its tradition, rendering the fantastical without leaning on genre conventions. This list isn’t meant to be definitive. It’s meant to offer a few examples of "outsider" fantasy, a “bouquet of suggestions,” if you will, for readers who have been looking for fantasy that operates by different literary rules.

A story about a woman’s search for independence and her unwitting journey into... witchcraft. It was published in 1926, one year after Mrs Dalloway, and has prose to rival that great modernist novel.

One-hundred years ago, Dunsany achieved the kind of heightened rhetoric that fantasy authors only fumble after today. This is a book about longing and about beauty, written by an author who knew what faery was.

A sad, energetic, deeply curious narrative told from the perspective of the monster of the Old English poem Beowulf. This is fantasy at its grittiest.

Another exploration of faery, written by a friend of Virginia Woolf’s. I love the humour, the wit, and the premise: two rivers flow into the town, the Dapple and the Dawl—and on the Dapple forbidden fairy fruit is smuggled in from fairyland, which if eaten will awaken a great longing...

A retelling of the Arthurian cycle. Despite its general jocularity of tone, White’s reflective, deeply wise interludes give the work a profound pathos. Arthur’s relationship with Merlin is a delight, and gives the story much of its energy.

A gem of a book, with the most lovable protagonist of all: a brownie. What’s a brownie? You may know them by the name “house elf,” or hobgoblin. This creature presides over a country manor when a certain Puritan family moves in...

A tale of “an ancient China that never was,” told with great warmth and a storyteller's pure delight in event. There is no excess in the prose, and each page has something to make you grin.

8) The Crock of Gold (James Stephens)

“In the center of the pinewood called Coilla Doraca there lived not long ago two philosophers...” So begins this little book of fantasy in the Irish folkloric tradition; its humour and philosophy are beautifully understated through small moments of human connection.

Watch a group of ghost-hunters in a rambling old mansion go to pieces with all the psychological subtlety and chilling care that characterizes Jackson’s fiction. This book is genuinely scary.

“I am sorry I cannot explain the thing to you,” says the Raven to Mr. Vane at the narrative’s commencement: and I am sorry too. If the reader is able to put up with MacDonald’s inchoate dream imagery, they will be taken for a drug-trip through a kind of purgatory and into deep theology.

An restless youth strays far from the English countryside into a political revolution, then returns to discover an underground utopia. One critical calls it a “philosophic myth... in the tradition of Plato.” Wonder being both fantasy’s and Plato’s primal category, it is a fitting comparison.

This is a four-act lyrical drama. The work of mythopoesis that Shelley accomplishes here is impressive. Most terrifying of all his gods is Demogorgon, who is “Ungazed upon and shapeless; neither limb, / Nor form, nor outline; yet we feel it is / A living Spirit.” Most beautiful are his descriptions of nature in the after-world of Prometheus’s victory.

King Arthur and his knights again, this time in a series of twelve narrative poems in blank verse. Elegiac and haunting, reaching its most tragic heights in, surprisingly, the section on Sir Balin.

Lavish Elizabethan poetry recounting the deeds of several knights who each embody a virtue. The story is an allegory—or rather, it gives ideas life. This is what, for example, one hero encounters in dragon Errour’s den: “she lay upon the durtie ground... Of her there bred A thousand yong ones, which she dayly fed, Sucking upon her poisnous dugs, eachone Of sundry shapes, yet all ill favored.”

1) I haven’t included short story collections for a number of reasons. First, the form being far freer than the novel, it is also without as traceable a tradition (at least I’m not so expert as to do so). There is also the fact that many authors who are considered “non-genre” have nevertheless made use of the fantastic in their short fiction. For example, E. M. Forster, known primarily for his social novels, has a number of fantastical narratives in his collection The Celestial Omnibus. Truman Capote, Joyce Carol Oates, Italo Calvino, and John Collier, are some more examples.

2) I have avoided listing authors whose work is considered to be in the tradition of “magical realism,” not wanting to claim them for fantasy’s own. Some of these include ‎Jorge Luis Borges, ‎Isabel Allende, Gabriel García Márquez, and Salmon Rushdie. I have used the same principle of non-interference with Absurdism, e.g., Gogol, Gombrowiz, Kafka, and Flann O’Brien.

3) There may be a number of Japanese authors whose use of the fantastic falls well outside genre conventions. I happen to know only a few: Natsume Sōseki, Kōbō Abe, and Haruki Murakami (that latter’s The Wind-Up Bird Chronicles is among my favorite books). But again, I don't want to claim these as "fantasy."

4) I haven’t included the Inklings in this list (C. S. Lewis and J. R. R. Tolkien) because they are on every other list.

5) Some books came close to making it and are worth mentioning. They aren’t perfect fits either because in a few (a) there are enough genre conventions present to disqualify them, (b), there isn’t enough fantasy, or (c) I didn’t enjoy or react to them strongly enough to put them on a list.

Posted by Patrick Doerksen at 12:55